Salt Lake City, Utah, the home of the Mormon Church, is also the repository of one of the largest genealogy collections in the world. It is not just a collection, but a large and active group of genealogists.

We recently went to Salt Lake City  because I have   an interest in genealogy and The Church of Jesus Christ of Latter Day Saints Family History Library is the place to go. And we had to use up two Southwest Tickets. I  had not been there since 1953 (Boy Scout Jamboree in Irvine, California) when we stopped on the way.

My focus was on the Genealogy Center. I am a member of the New Mexico Genealogy Society and like many old people am interested in stories out of my past. For example see: Bertha and Gertrude.

The Center is several stories high with several basements.  The main floor provides a hands-on genealogy experience; complete with the latest audio-visual equipment and interactive exhibits. You can track your ancestors.

The main research room consists of hundreds of computers and dozens of Elders who are available to assist you in your research. All  you have to do is raise your hand and a knowledgeable Elder is at your side explaining what you need to do. They are genealogy experts.

Computer Stations on the First Floor of the Genealogy Center.

You can spend all day there.

The library has every thing a genealogist needs; and, they are adding to it every day. 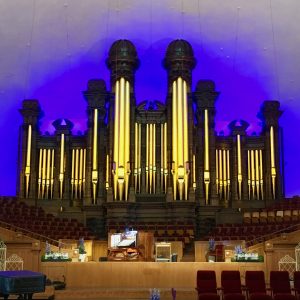 Every day at noon there is  a free organ concert; well worth attending.

The rest of Salt Lake City is interesting. We stayed a block from Temple Square in an AirBnB. We could walk everywhere, but there was also a tram.

There was a good restaurant for breakfast in a Church Building; however, no coffee. They directed us to a cafe down the street where we could get coffee to go. By the time I picked it up, my breakfast was ready.

We had dinner at Lyon House; cafeteria style. 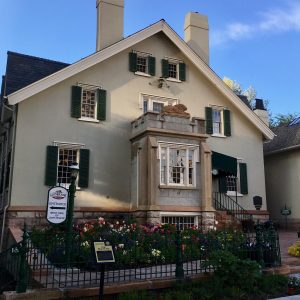 The food is simple and the portions generous. Again, no coffee; and, no alcohol. Eating at non-church restaurants allowed us wine with our meals.

The  3 night trip exceeded our expectations. We arrived in the afternoon, took a $11 Lyft ride to The Kimball a block from Temple Square and settled in.

There are several church related museums.

We watched people line up outside the Temple to get married. There were dozens of groups waiting their turn to go into the Temple; non-church members are not allowed in.

There are genealogy sources in all  states at Mormon Churches.

You can find out about your ancestors without exposing yourself, your age, your ignorance, etc. Old People like to find out things anonymously.

What do old people want to know? Five “old” keys to the Salt Lake City trip:

GERTRUDE AND BERTHA, GREAT AUNTS, WHOSE UNIQUE LIVES WERE DISCOVERED THROUGH GENEALOGY!

When I was between 5 and 10 years old, in the late 1940’s, I used to visit my grandparents in Villisca, Iowa. I would spend time with my grandfather’s two sisters, who were in their 60’s, and who were unlike any other women (housewives) that I knew. My recent interest in genealogy has proven how unique they were.

Gertrude Winifred Tyler was born in 1882 in Villisca, Iowa. She graduated from Simpson College in Indianola, Iowa in 1909 followed by a Master’s Degree in Education from Columbia University in New York.

In 1913 she opened Stevens Memorial Suining Girls Boarding School in Suining, Sichuan, China, for the Women’s Foreign Missionary Society of the Methodist Episcopal Church. She ran the school for around 30 years.

During this time she made numerous trips back to the US and I found her name listed as one of 19 US Citizens on the passenger manifest of the Nippon Maru, which arrived in San Francisco from Yokohama, Japan on July 16, 1919.

Gertrude had a large collection of Chinese wall hangings and artifacts. I have some of the hangings, but most of her collection is now in the Villisca Public Library.

Aunt Bertha, taught school in Orient, Iowa, graduated from Simpson College in 1912 and received her Master’s in Education and Psychology from the State University of Iowa in Ames, Iowa. She was then a school principal in Orient, Iowa and the Superintendent of Schools in Orient, Iowa for 16 years.

From 1934-1938 Aunt Bertha lived in Little Rock, Arkansas where she was the Dean of Women and Professor of Education for Philander Smith College, a college established in 1877 for freed African-American Slaves and still in existence and thriving today. The school was supported by the Methodist Church.

I wrote to Philander Smith College and they sent me an electronic copy of the 1935-36 College Catalog, which lists Bertha as the Dean of Women and Professor of Education. It also shows that tuition was $27 per semester, room and board was $15 per month and laundry was $4 per year. Tuition is now $12,564 and board and room is $8,250.

In 1938, Frank P. Tyler, Gertrude and Bertha’s father was in ill health. Gertrude and Bertha, abandoned their fascinating careers and came back to Villisca to run The Tyler Ice And Coal Company and the family slaughter house, which fascinated a 9-year-old boy on summer vacation.

The ice plant consisted of a huge room with a saline solution where they froze water into 100 pound blocks of ice, which were then split into smaller blocks and delivered throughout Villisca, as everyone still had ice boxes after WW II. Another part of the ice plant consisted of lockers where people stored their frozen food until they were ready to use it. The predecessor to the ice plant was a pond where they cut ice in the winter, stored it in warehouses insulated with saw dust and sold the ice in the summer.

The slaughter-house was a few blocks a way and only a small building where a couple of cows and pigs were slaughtered each week. The animals were shot with a .22 rifle and hoisted up on a winch to bleed out before being cut up. Gertrude and Bertha made blood pudding out of the blood and used every part of the animals.

My genealogy research so far has been on the internet; but, the next step is to track Gertrude and Bertha on the ground; visiting actual sites in Villisca, Iowa, Indianola, Iowa, Orient, Iowa, Columbia University, Ames, Iowa and maybe even Sichuan, China. It will be my own Genealogy Road Show, but will be on-site.

Last summer, my wife and I tracked her paternal and maternal ancestors through upstate New York and had great luck with local libraries, historical societies and genealogical societies, not to mention court houses and cemeteries.