Star of Teatro Dei Pupi SicilianiIn Syracuse, Sicily (Italy) I attended a performance at a small puppet theatre; about 30 seats. The performance lasted an hour and was interesting because of the work that went into making the puppets, the skills that the puppeteer need to manipulate the puppets, and the historic nature of the theatre.

It was a simple theatre; wooden seats; small stage; and, the puppeteer came out after the performance. It was in Italian, so my deafness was not a problem. It was one of those out-of-the-way things that makes trips interesting/

This was on a Rick Steves Tour of Sicily and was one of many events that I would not ordinarily come across.

The tour took all the seats. Each puppet was controlled by sticks and each had a person operating it. The puppets were about three feet tall.

If you have grandchildren and room in your bags, there is a shop: 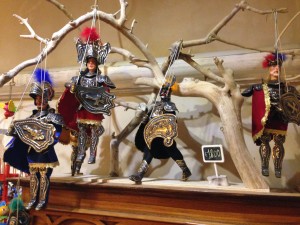 Shop at the puppet theatre.

There are only a few of these theaters left. If you get a chance, visit one.

For more on these theatres and other locations in Sicily see: Teatro Dei Pupi Siciliani.