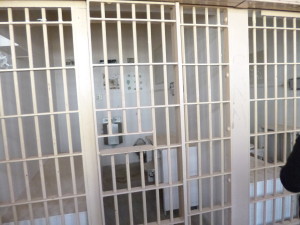 PANAMA CANAL TRAIN – COLON TO PANAMA CITY – a trip along the canal.

On March 15, 2017, while on a Road Scholar trip, thirty of us traveled by train along the  Panama Canal from Colon, Panama  to Panama City, Panama.

We had traversed the  Panama Canal by small ship, spent the night in Colon and toured the city the next morning.

At 5:15 PM the train left  from an old loading platform in Colon. We had seats in the dome car and rode along the canal for an hour and fifteen minutes to Panama City. The train runs once a day in each direction.

Our tour director lined us up to  board  at 5:00 and he had staked out the dome car for our group; sharing the dome with another  tour.

Seniors get a break in the fare if they are Panama Citizens or Permanent Residents. Other wise it is full fare: $25. But the extra $7.50 is probably worth it; and, I am sure that our Road Scholar had worked some sort of deal.

The history of the Panama Canal Railway  is fascinating as it predates the canal, was used during the California Gold Rush, and, in 1852, when it opened,  was the only transcontinental railway. It was also immensely profitable, as the Panama Canal is today.

Don’t plan on taking a boat trip through the canal and catching the train the same day. It won’t work. There are too many variables in getting through the locks and to the train station. You don’t want to be stuck in Colon without a hotel reservation.

If you need transportation and are not on a tour, remember that Uber works in Panama and is reasonable.