END OF THE WORLD – RESCUE AT SEA – why seniors on cruises need insurance!

I was recently on a Viking Sun Cruise around Cape Horn, going from Buenos Aires, Argentina to Santiago, Chile. While walking the 1/4 mile walking track on Deck 2, I noticed a Chilean Navy Ship, the General Service Boat Talcahuano,  in the distance beginning to circle the ship. Part of the deck path was closed and a tender had been launched. I,  like about half of the 900 passengers, watched for the next hour, or so.

While we watched, the tender made several attempts to hook up with the Chilean Navy Ship, but couldn’t get close because of the waves. The Navy vessel continued to circle the ship and tried to reposition itself.

The tender returned to the cruise ship and waited while the Navy ship circled again. I was right above the tender on deck 2 next to the blocked deck area.

Through an open hatch in the top of the tender, I saw the Captain of the Viking Sun, whom I think had just taken command of the tender. He headed straight for the Navy Ship, and without apparent incident, went along side and transferred the passenger on a stretcher, her husband and the ship’s doctor to the Chilean Navy Ship which took off for a land-based hospital.

I was totally impressed with the way Viking handled the situation.

I did not hear of any report of the event on the Viking Sun; however,  the next day Newsweek reported that the passenger had fallen, had injured herself, and had been evacuated to Coronel Bay, Chile for emergency treatment. Look at the Google Map of Coronel Bay; not quite the “End of the World” around Cape Horn, but close.

This  raised a number of questions in my mind. Questions to ask about your travel insurance on a cruise; or any international trip, especially, if you are old; and, maybe even if you are not.

The bottom line is that this lady was injured, transferred on the high seas, in a stretcher, from a cruise ship to a tender to a Chilean Navel Vessel, in international waters. She was then taken to a foreign hospital. She and her husband probably had no idea where they were going except that it was near “the end of the world.”  We had just come around Cape Horn.

The real question is: What next? Did she come back to the ship? How? Where? When? Did she go home? How? Who paid?

I have in the past few years had two friends who have  gotten sick while traveling, both in China. One spent over a month in a Chinese hospital, was transferred  back to the US with medical support;  and, then died. No insurance – wiped out an inheritance. The other had a stroke, spent several weeks in a Chinese hospital and was flown back to the US with a medical professional accompanying her. She had great insurance which covered all the costs and she is doing fine.

Travel insurance is expensive if you are old; but, consider the alternatives.

You might even want one of your kids to review your travel policy, if you have one, and advise you. None of us ever reads the policy, we just pay and board the ship.

No matter how you work it, you are going to have to lift bags, roll bags, and deal with bags beginning with getting them out your front door and into the car. Then, there is check in, retrieving bags at the destination, and customs.  Finally you have to negotiate the bags, and watch them, in getting to the ship.

Once aboard the ship, you discover that the staterooms are smaller than the rooms at assisted living, especially if you are sharing one with a spouse. The closets are small, the drawers are small and there is little, if any, extra storage space. Fortunately, at least on Viking, there is room under the bed for 4 suitcases, one carry-on and a few personal items.

Then, unless you are in a high-end stateroom, there is barely enough room to turn around, much less to sort your clothing on a daily basis and keep the clean stuff separate from the dirty.

The question is why!  Where are you going? What is the purpose of the trip? What do you really need?

The Viking Sun is great!   Jeans and shorts are only prohibited in Speciality dining rooms and The Restaurant at dinner. There are free washers and dryers on each deck. The bottom line is that you can deal, even if you are old.

My trip was from Buenos Aires, Argentina to Santiago, Chile around cape horn.  It lasted 18 days.

I am old. I take a shower every day. I might even wear the same clothes two days in a row.

Like most old men, I have a “uniform.”  I wear comfortable  jeans, and have never been denied access, even  to 4 star restaurants – with a turtle neck and a jacket, you can go anywhere. Old men have become more stylish, wearing jeans, since it is impossible to find checkered pants with zippers that don’t work. The last ones I saw were on my father, years ago.

So for a 3-week trip on a cruise ship, what do you really need:

Enough clothing for 7 days – I don’t really want to do laundry every day.

Tai Chi slippers – good for fitness center and walking around on ship.

Light weight pants that you can sleep in or wear in an emergency.

REI light weight travel pants that will get you past the “no jeans” restriction in the fancy dining rooms.

A vest that with pockets to wear on trip and finesse on formal occassions – easy to run through security and safer than having everything in pants pocket. See blog where I left my driver’s license in security check in and couldn’t rent a car.

Everything the same color, so you only have to use one washer and dryer.

One big problem old people have is keeping track of things. With 3 bags of clothing on a trip, you have no idea where everyhting is which leads to frustration and confusion.

You didn’t get old and able to take this trip by being stupid.

VIKING SUN, a behind the scenes visit to the galley – 4140 meals daily!

On February 6, 2019 while on a Viking Sun cruise, we visited the ship’s galley. The galley tour, like the bridge tour, is not advertised due to space limitations, so if you want to take the tour on any ship ask. You should also ask about any other tours that are not advertised.

The Viking Sun carries 930 passengers and a crew of about 450. This works out to 4140 meals prepared and served each day, plus 24 hour free room service and other food outlets open from early morning to late at night. Preparation of this food requires 106 chefs and a large number of support staff.

The several kitchens are spotless and computer controlled as far as food that has been ordered, cooked and delivered to one of the dining areas. The ship’s nurse checks the cooking staff’s hands each day for long or dirty finger nails.

Everything is made from scratch except for gluten bread. Viking Chefs make the gelato, all pastries  and everything else from scratch. The pastry chefs start baking at 10:00 PM so that bread, bagels, muffins and other items are available in time for breakfast.

In addition at the World Cafe, line chefs cook eggs, pancakes and waffles to order in front of you.

In addition, they must have a massive wine room as house wine is free at lunch and dinner. In South America it was from countries that we were stopping at.

Escalators and dumb waiters speed the food from deck one to the restaurants on higher desks. Food goes up in a dumb waiter separate from the one that carries waste and dirty dishes down. 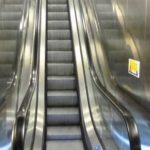 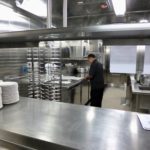 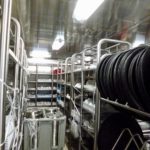 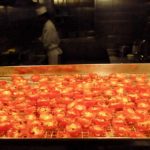