← THE HIGH LINE – Walking New York on the 2nd Floor
WHEELS MUSEUM – a must for rail buffs visiting Albuquerque! →

HABITAT FOR HUMANITY IN MACEDONIA – old people can do some good!

In 2010 my wife and I went to Macedonia for two weeks with Habitat For Humanity to help build an eight unit apartment unit. We had volunteered with Habitat in Albuquerque, and had spent two weeks in New Orleans helping to restore homes damaged by Hurricane Katrina,  involving Habitat, but not through Habitat. This was our first Habitat trip out of the country, although we had lived in Eastern Europe as volunteers and had been to Macedonia before.

Roma family collecting nails, sacks and other items to sell.

Photos of Habitat For Humanity, Macedonia. 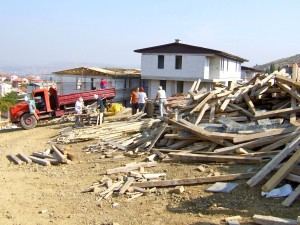 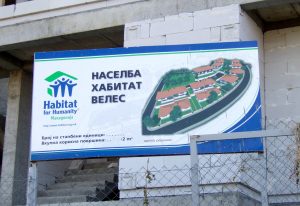 We are retired and in 2010 were 68 and 70. Old age was not a problem, nor was our inability to speak Macedonian. It was not scary and we had no problems. Get travel insurance as Medicare does not work in Macedonia.

None of the 18 or so people who were on our team had any construction experience; however, there was a Macedonian Contractor who worked with us along with a future resident of the apartments that we were constructing. This was a lot like Earthwatch, where you pay to volunteer, meet interesting people and see a new part of the world in a deductible way. We did five Earthwatch trips at a younger age, and that is also worth looking into. We have seen all the museums that we want to see for awhile, so volunteering is the way to go.

We worked from 9 to 5, Monday through Friday. We stayed in a local hotel which also provided meals. We took a bus to the job site and ate lunch on the job. We wore old clothes, hard hats and gloves.

At this point in the construction, we were assigned to help with pouring cement which was mixed on site and moved in wheelbarrows. We also removed cement forms and pulled out the nails. The wood would be used on future Habitat sites. The construction is much simpler than in the US; it is mostly manual labor. There is not a lot of equipment. But, we did build homes.

The wrappers that the insulation came in along with the bent nails that we removed were recovered by a family of Roma (Gypsies) who came each day in a horse-drawn wagon and used a magnet to locate the nails in the ground. They would straighten and re-sell them. A Roma family was scheduled to move into one of the apartments when finished, but not the ones in the wagon pictured above.

We worked for two weeks, took trips around Macedonia on the week-ends, did not get sick or injured, had a great time and came home with different stories to tell.

The food was simple, local and good. The hotel was clean and the venue for a few weddings while we were there.

One night we had dinner at a winery and probably drank too much wine. Macedonia has a number of vineyards and wineries, so the trip was worth it just for that.

At the time of posting this blog, I could not find any Habitat opportunities in Macedonia, but there are some in Romania, as well as the rest of the world. There were two Habitat home building projects in Macedonia in 2017 and I expect more in 2018. Go to Habitat in Veles to see the costs, work, itinerary, etc. for 2017. This will give you an idea of what we did and paid.

We met interesting people from other parts of the US and from Macedonia.

And, we deducted the trip.

Just pick a part of the world that needs help and go for it.